Reshoring of Polyolefins in North America

What are the drivers and challenges to reshoring in North America? Nexant conducted a survey of the plastics industry, in collaboration with Plastics News, to understand reshoring trends and the effect on the North American market. Nexant received about 200 survey responses from compounders, fabricators, equipment suppliers and toolers. About 70 percent of the survey responses analyzed, mentioned that they had either reshored or were planning to reshore in the near future. One of the major reasons quoted for reshoring is the rising labor costs overseas, particularly in China. Wages in China have almost doubled in the past decade, while U.S. wages have stayed relatively flat. Low cost natural gas and the diminishing price gap between the U.S. and South East Asian polyethylene prices is making North America more cost competitive for manufacturing. However, about one third of the fabricators mentioned that they would not consider reshoring to North America as they supply Asian markets and the logistic costs would not make sense if manufacturing was moved back to North America. Also, it is not critical to reshore in cases where the product quality is not crucial, which has been identified as another driver to reshoring. 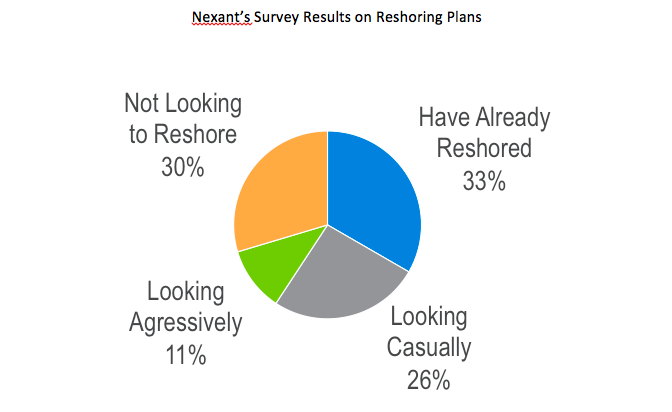 Is North America cost competitive for manufacturing when compared to China? Nexant compared the total costs, i.e. cost of production plus logistics cost for delivering polyethylene blown films and polypropylene injection molded items in the U.S. market in 2014 and 2019, for manufacturing in the USGC, Mexico and China. Repatriation activities are being observed in blown films and injection molding segments particularly. In 2014, for polypropylene injection molded utensils, even though the cost of production was the lowest in China, when transportation cost was added, USGC becomes more attractive as a manufacturing location for supplying the domestic U.S. market. By 2019, USGC and Mexico is expected to become more cost competitive for manufacturing, as a result of rising labor costs in China and declining price gap between USGC and China polypropylene prices. U.S. propylene markets have tightened appreciably in recent years aggravated by the rush towards lighter feedstock at crackers and reduced availability of supplies from the refinery. New investments in PDH units by companies such as Ascend Performance Materials, Enterprise Products, Dow Chemical, Formosa in the U.S. are set to lengthen supplies by 2020, restoring markets to a more balanced position and bringing U.S. prices on par with Asian polypropylene prices. 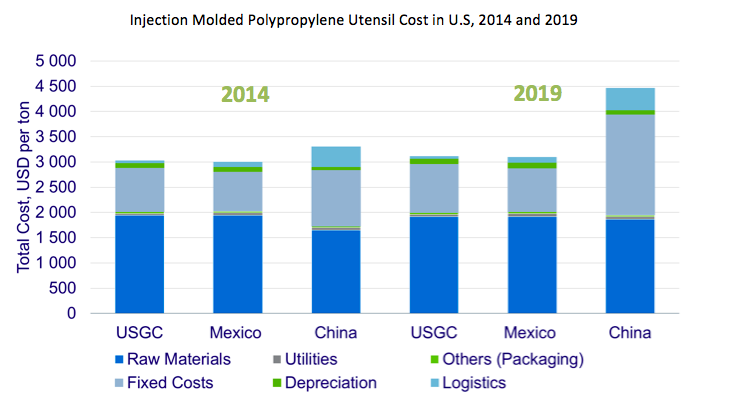 How much of the domestic demand growth in North America will be driven by reshoring? The impact of reshoring on domestic polyolefin demand in North America will not be significant; with about ten percent of the total 4 million tons demand growth from 2014 to 2020 driven by reshoring activities. Polyethylene accounts for the lion’s share of polyolefin reshoring. The majority of the growth will be in the injection molding segment as it is an automated process, and requires less labor; providing manufacturing advantage to the United States. Repatriation is occurring in the automotive, packaging, and appliances sectors of injection molding. NexantThinking’s recently published report “Impact of Reshoring on North American Polyolefin Demand” provides an in-depth analysis into Nexant’s reshoring survey results, reshoring drivers and challenges, reshoring measurement indices, North America’s manufacturing cost competitiveness and impact on polyolefin applications growth. Article courtesy of Nexant Priyanka Khemka, Senior Analyst Email : pkhemka@nexant.com Contact Number: 914-609-0320 Company website: http://thinking.nexant.com/
infographic reshoring backshoring onshoring insourcing nextshoring rightshoring Made in USA reshoring initiative data